ECA stands for electrochemical activation and is a technology that has been employed for more than 100 years, although it was not until the 1970s that the physicochemical properties of ECA were extensively researched at the All-Russian Institute for Medical Engineering.

The use of electrolysis for producing reductant-oxidant solutions is used in the processes of water purification and decontamination, as well as for transforming water or diluted electrolyte solutions into environmentally friendly anti-microbial, washing, extractive, and other functionally useful solutions.

This is largely due to ECA high activity, use of cheap raw materials, and ease of production.

ECA works the same way as the human immune system. When the body is under attack from invading bacteria and viruses, the immune system immediately responds by sending neutrophils (white blood cells) to the invasion site.

Neutrophils are one of the body’s main defenses against bacteria and, once activated, produce large amounts of a mixed oxidant solution which effectively eliminates invading microbes and pathogens.

This weak acid, which occurs naturally in the human body, is called hypochlorous acid (HClO), and it is a potent disinfectant. It is non-toxic to humans and is highly effective as an antimicrobial agent with rapid action. Hypochlorous acid is widely recognized as one of the most effective known biocides.

In detail, the system consists of an electrolysis cell containing two electrodes, a cathode, and an anode, separated by a diaphragmatic membrane.
In the cell is injected an aqueous solution consisting of filtered and softened water and, depending on the application, sodium chloride (NaCl, salt) or potassium chloride (KCl). With the use of electricity with predefined and controlled amperage and voltage values, the cell produces an electrically-activated liquid, Anolyte, with high disinfection power that can be used in various applications.

This unipolar electrochemical activation created by potential gradients of millions of volts per cm2 between the anode and cathode terminals results in the creation of solutions whose pH, Oxidation-Reduction Potentials (ORP), and other physicochemical properties, lie outside of the range which can be achieved by conventional chemical means. 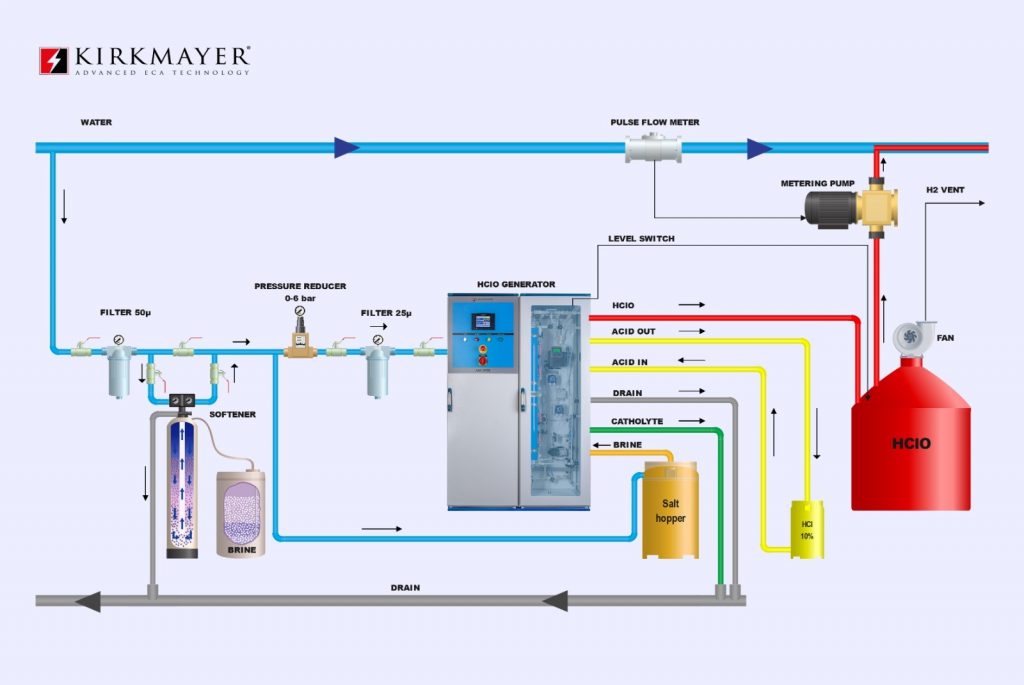 CHARACTERISTICS AND ADVANTAGES OF ELECTRO-ACTIVATED SOLUTIONS

Electro-activated solutions produced by the system are respectively:

As presented in several scientific publications, multicellular organisms, including humans and hot blood mammals, to defend themselves against pathogens and foreign microorganisms, can synthesize, through metabolism, complex mixtures of metastable oxidizing compounds.

The oxidizing liquids and their chemical production mechanisms are similar to those generated in our ECA system and are precisely these common characteristics that give Anolyte high biocompatibility with human tissues and multicellular organisms besides not being toxic to the environment.

Anolyte has the following advantages:

Anolyte and Catholyte also have the following characteristics:

Our ECA technology incorporates components with a unique architecture that makes it revolutionary. Unlike other cylindrical coaxial cells, which today are the most common and widely distributed on the market, our cell has been optimized, conceived, and developed with a special anode geometry that has allowed us to integrate a double electrodes (anode-cathode) cooling system.

The development and design of new components have helped solve the typical issues of this class of devices, increase performance and increase reliability through the following technical solutions:

Which eliminates the typical problems of cylindrical coaxial cells, such as:

In particular, it should be noted that:

Our patented REACTRINA® technology mirrors the human immune system and generates HClO under specific electrochemical conditions using a combination of water, salt, and electricity to fight viruses, bacteria, and other harmful microorganisms.

REACTRINA® revolutionizes the coaxial electrochemical cell concept in these ways:

First double-cooled cells in the world 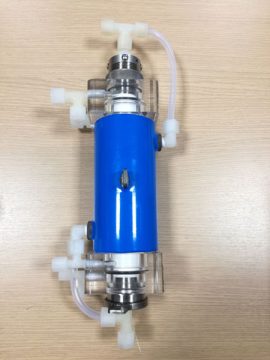 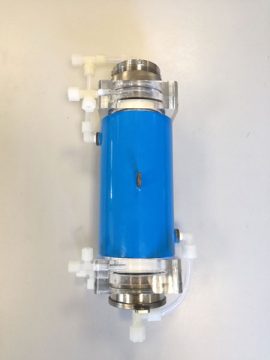 Bactericidal, fungicidal, and yeasticidal activity based on the results of HClO made with Kirkmayer technology, product tests in accredited laboratories:

Virucidal activity based on the results of research on the effectiveness of HClO against virus strains: Poliovirus type 1, LSc 2ab, Murine norovirus, Adenovirus type 5, Vaccinia virus strain Elstree (SARS CoV-2 test virus): tests performed according to the PN-EN standard 14476 + A2: 2019-08

Partial virucidal activity against Coronavirus (PEDV) by fogging with HClO of the disinfection cabin in which there was a surgical mask bearing the coronavirus (PEDV). The whole process took 60 seconds: 10 seconds, fogging + 50 seconds, leaving the mask in the cabin (reduction: 1.0-1.2 log = 90-92%), with the active substance concentration: 0.02% (200 ppm), i.e. 40% solution. Tests were carried out at the State Veterinary Institute.

Safety for people and the environment: